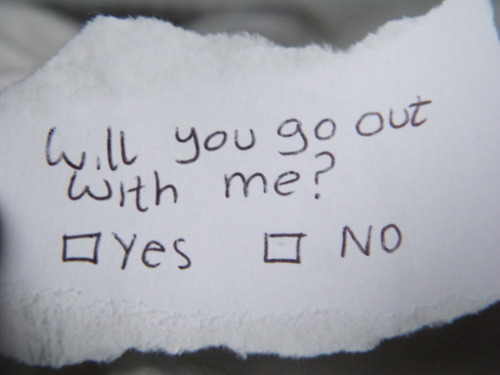 How to Ask Him Out – Without Actually Asking Him Out

Are you shy when it comes to flirting? You’re not alone. Many women find it difficult to break out of their shells when it comes to making romantic advances, making it difficult to ask out that great guy! Recently I met a man who I wanted to ask out, but I was hesitant. I’m shy by nature, so I obviously haven’t quite mastered that whole confident, fearlessness thing.

The way I ended up asking him out was pretty genius, because it worked – and because I didn’t even have to actually ask him out.

Here’s what happened to me: My Mom had asked me if I could go to her house to wait for the plumber since she would not be home in time to let him in, but little did I know, the plumber was a total babe. His babe-status caught me off-guard at first, but I hatched a plan. I pretended to step out quickly, so I’d have an excuse to leave him a note (I actually hid upstairs to maintain this illusion – it’s OK,  you can laugh at me). The note said: I had to step out for a bit, but if you need anything just call me on my cell! and I wrote down my number. Underneath my phone number, I added, or just call me anytime! and drew a little wink face. He obviously knew I wanted to go out with him (otherwise I would not have added that last flirty part to my note). He sent me a text message letting me know he was all finished, and after initially making fun of me for leaving a stranger alone in my Mom’s house (or so he thought) – he then went on to say how cute he thought I was, and suggested we go out for a drink. It worked, and it was that easy to get what I wanted – a date!

Here are a few tips for asking a guy out without actually having to ask him out:

It worked for me, and it will work for you! Leaving a note is a cute and effective way to get your message across without having to worry about tripping over your words in person because you’re nervous. Asking a guy out face-to-face is much too nerve-racking for some people, and it’s best to avoid it if you think your nervousness will result in being tongue-tied or mumbling incoherently  The note removes the rejection-factor. If he simply ignores your note, you won’t feel as rejected as you would if he rejected you to your face. Make sure that your note has a hint of flirtation, but not too subtle. You want him to clearly know that you’re flirting, leaving him confident enough to make the next move.

Use a Trusted Friend

If you have connections, use them! Getting a trusted friend to put in a good word for you is smart and assertive. Your friend may even subtly suggest to your crush that he ask you out. The end result? He’s asking you out – you didn’t even have to ask! Mission accomplished.

If you have a crush on a guy, sometimes all it takes is a Facebook friend request to get the ball rolling. If you take the first baby step of adding him to Facebook, he’ll be more inclined to then take the next step to send you a message asking you out. You can always shoot a Facebook message his way, too. Either way, social media definitely helps pave the way to get the two of you chatting – sans embarrassment.

Have a Date He Can’t Turn Down Planned

To pre-plan a date idea for the two of you, you’ll have to get to know what interests him first. You can always start off by casually chatting with him whenever you see him. Ask him questions like what his favorite food is. For example, if he says sushi, you could then go home and research sushi places! Pick one that got rave reviews, and say to him “there’s this sushi place I heard about that is supposedly amazing, I kind of want to check it out. You like sushi, right?” If he doesn’t get the hint and take it from there, you’re better off without him.

Of course, your best, most direct bet is to simply exude confidence while straight up asking “do you have plans next Saturday night?” “I have an extra ticket for the hockey game tonight if you’d like to join” or “I really want to see the new James Cameron movie, do you want to see it with me this weekend?” These approaches involve actually asking a guy out. You have to be confident, bold and direct. It is completely understandable that some people are too shy to be so forthcoming. However, if you’re ever feeling extra-confident one day, you should try it! Just to be able to say that you did. PlentyOfFish Tweets Of The Week