Why We Still Can’t Stop Talking About Online Dating

Before a time when the world was obsessed with flavor of the week apps and shiny new tech startups only to forget about them as quickly as you can swipe left, I got hired at an online dating site.

The year was 2010 and I had just turned 21 years old. The concept of dating online was more publicly uncomfortable then, although, almost 5 years later, the reaction remains more or less the same when people learn that I work for PlentyOfFish. Sometimes shock, often an involuntary facial twitch, always questions. Although the positioning of online dating in conversations is changing, one thing remains the same: we’re having the conversations. On the way to work, in the line at Starbucks, out for drinks with friends on Friday night, we’re having the conversations. So what is the big deal about online dating, and why can’t we stop talking about it?

When we create these digital portraits for ourselves online, we’re navigating in a space we don’t really understand, but excites us nonetheless. This also makes us wary, though. We meet a jerk at a bar and we chalk it up to bad luck. We meet a jerk while we’re online dating, and it starts more of a conversation because we can’t make sense of the moving parts. The onus can be on cyberspace for bringing this loser to your inbox and not your own judgement. Still, most days I’d bet on the good judgment of matching algorithms and data scientists behind the scenes of a dating site over a great deal of my friends at the bar.

Even so, in the media you’re still more likely to hear about an online first date gone wrong than Harry and Sally (and thousands of people just like them every year) who met online and lived happily ever after, because those battle stories reassure us that there are still people out there who haven’t found anyone either! The thing is, Harry and Sally have told their friends, and their friends have told their friends, which results in a great deal of signups for us, and at least 1 in 5 marriages for those who are keeping track.

Dating online means putting yourself out there – like really out there. Your hopes and dreams and wish list for an ideal partner is out there for your exes, coworkers and aunt Barbara to stumble across, and that can be scary at first. Maybe aunt Barbara actually met someone, and that pushed you over the edge, or maybe you heard that a celebrity is now considering joining a dating site after her latest breakup. Either way, you don’t want to be left behind.

So before you know it, you’re signing up too. And it’s strangely optimistic, to see those rows of hopeful faces smiling back at you, all of them single. So like a high school dance, you hang out on the outskirts for a while, maybe even until someone makes the first move and messages you. All of a sudden, our false modesty vanishes and the experience becomes more human than humiliating because you’re actually allowing yourself to have fun.

There was a time, so I’ve been told, when dating was not always this way. Despite this, I’m inclined to go the tough love route and tell you, sorry, but this is the way it’s going to be from now on. Technology has been seamlessly and irreversibly integrated into almost every nook and cranny of our existence, and the advancements in the online dating space are remarkable.

We’re obsessed with maximizing efficiency and tailoring all of our experiences to best fit our needs, but when it comes to our love lives, maybe we’re still more old-fashioned than we’re willing to admit. We routinely blog about deeply personal aspects of daily life, order our groceries, reserve a Car2Go, plan trips across the world and customize our own Nike sneakers, all online, but when it comes to dating online, we pretend it’s still just a little too out there.

But that’s OK! We’re still afraid that our stories won’t quite stack up when we’re recounting to our grandchildren that yes, “Grandma was checking her PlentyOfFish app on the commute to work and saw that Grandpa had selected her as a Favorite, and the rest is history.” We may not necessarily have the ancient family feuds or years spent oceans apart, but that’s only because life has changed. Dating has changed, and online dating will continue to evolve. But the hope and the intimacy and the love, that’s still the same. Besides, you have nothing to worry about, because in 10 years all the romantic comedies will be about online daters anyway. 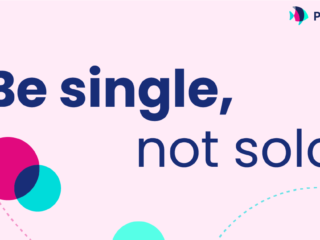